a path at Bamboo Giant Nursery

My Story about Bamboo

So part of the reason I like bamboo so much (besides the fact that it’s awesome) is that it was the first plant that I started to propagate and sell for cash. The story goes like this.

Once upon a time my Dad went through a Japanese Garden phase, (which is probably the root of my affinity for Japanese gardens), and planted some bamboo next to the patio of the house I grew up in. It was planted in a metal partition that was intended to keep this very aggressive bamboo (Phyllostachys aurea) from spreading. But after my Mom and Dad separated and my sis and I went away to college, the yard went feral. Of course the bamboo burst through the partition and started taking over the yard, sending shoots up over fifty feet away from the original planting. Every once in a while the rhizomes would even make it all the way under the house and send up shoots in the front yard.

For years I went over to help my aging mother with the yard maintenance, and I would just cut the bamboo down, and sometimes even dig up the rhizomes. Sometimes I would just grab a stalk of bamboo and start ripping up the long underground roots, like pulling frayed carpet fibers away from the carpet backing. When I was done I would just throw all the boo into the green waste. Then one day I decided to try to put the rhizomes in pots to transplant them. After some simple trial an error in methodology and substrate I achieved a success rate of about 90% with my divisions. I would mix in a lot of sand into the soil mix to help increase drainage, which is very important for almost all species of bamboo. I would go to the dollar store and buy gallon dish tubs, because the bamboo grew better in wide, shallow containers.

Soon I began selling divisions of Golden Bamboo (P. aurea) on Craig’s List, planted in dish tubs, and returned to my Mom’s house about once  a month to restock my supply. I also started selling other plants on Craig’s, but the bamboo was my biggest and most expensive plant for sale. I made almost $1000 selling bamboo in one summer. Not exactly the summer job I had in mind, but from there things started spiraling out of control, not unlike the rhizomes of bamboo tangling through the soil in my Mother’s backyard.

Now, 10 years later, I am a complete plant junkie. I still have many of the divisions of golden bamboo that I dug up. I don’t sell them anymore. Instead I planted them in large pots, and they are all bushy and 8-10 feet tall. They are waiting patiently, I feel, for a careless moment when they can escape their container and begin taking over my yard, the state of California, and eventually the entire planet. I’ve thought about planting some in the earth, but decided I was tired of  breaking shovels trying to dig bamboo out of the ground. For now at least.

Bamboo has gotten such a bad rap as being invasive and rampant, and in many cases its true. Golden Bamboo is considered an invasive weed in many areas, and seeing how it started sending a web of rhizomes out through my Mom’s yard I can understand why.

I’ve also heard it said that if bamboo is so invasive then it would have taken over the world by now. But it is important to remember that the grass family (Poaceae) is relatively new in the plant kingdom, rising to its peculiar prominence during the most recent Cenozoic era. The Cenozoic is commonly known as the ’Age of Mammals’ (with our fauna-centric view of the world), but it could just as easily be called the ’Age of Grasses’. Even though Mammalia is a Class (K-P-Class-O-Family-G-S) and Poaceae is a family (two steps lower on the taxonomic hierarchy), there are twice as many identified species of grass than species of mammals. In fact, familyPoaceae is the fifth largest plant family, and three of the four most important food crops are grasses, not to mention the forage grasses provide for domesticated livestock. Grasses have not only drastically changed the course of human evolution, but the evolution of the entire planet as well.

Bamboo may still take over the world yet. It’s just getting up to speed. All it needs is another million years.

A Scientific Argument for Being Nice to Each Other

I went to college at U.C. Santa Cruz back when they still refused to give grades for their classes, something that has changed now that the school has grown up and quadrupled its enrollment. I’m proud to say that I graduated with a grade point average of “very good”. Sometimes I was able to earn an excellent in one of my classes, and more often than I would like to admit a satisfactory, and sometimes even the dreaded very satisfactory. Nothing worse than having your professor call your academic performance very satisfactory.

Another unusual aspect was some of the strange interdisciplinary majors the school offered. They were hybrids of academia with alluring and exotic sounding names, like cosmozoology, bioinformatics, and art history. And then of course there was the major that I chose, a combination of Psychology and Biology affectionately called Psychological Biology, or as most called it, psychobio. Many assumed that this was a special branch of life science amounting to biology for psychos, and thinking back to some of the folks in my classes that may have been an accurate description. But pscyhobiology actually consisted of three separate focuses at the time–neuroscience, animal behavior, and social evolution. I specialized in animal behavior myself, which coincidentally perfectly prepared me for a career teaching middle school, but that is another topic altogether.

Social evolution is the study of how social behavior has evolved over time. In many ways social behavior would seem to go against the Darwinian ideal of survival of the fittest, or Richard Dawkins’ idea of the Selfish Gene. Evolution saw animals in nature as inherently selfish and self-serving as they struggled for survival in the grim face of nature. This idea later fueled the egocentric and capitalistic ideals of 20th century materialism and trickle down economic theory. What sort of advantage do creatures gain from pooling their resources and working together? Large populations living in close proximity to each other experience increases in competition for limited resources such as food, shelter, access to mates, and in the case of humans, a paradoxical meme known as money. There are some obvious advantages to social behaviors, such as anonymity of the herd actually decreasing the chances of being eaten by a hungry lion, or the increase of sexual opportunities involved in being a part of large congregation of the same species, or the advantages of hunting in packs to corral and capture prey of all speeds and sizes. But in Darwinian terms the increase in competition would seem to outweigh other benefits, but we know examples of animal species exhibiting social tendencies in nature are plentiful.

In order to better understand social behaviors, social evolutionists broke down all types of social interactions into four basic categories. A social interaction consists of at least two separate individuals coming together, recognizing each other, and sharing some sort of common experience in the face of a cold, dark universe. Taking a page from economists, they used cost benefit analysis to categorize each class of social behavior. All social interactions can be placed into one of the four following categories, and they are described in terms of the cost and benefit for the initiator and recipient of the interaction.

Oh Wikipedia, don’t you know that bees dying for the hive is not altruistic because they are all related. They are dying to protect their sisters and mother which populate the hive, and dying for a family member that shares the same genes as you doesn’t count as altruism. It is selfish behavior dictated by the degree of genetic relatedness. Bees and ant colonies are actually one large family unit, and due to the fancily termed phenomenon of haplodiploidy, this is not altruism at all. And my students wonder why wikipedia should not be used a primary source for information.

So where does that leave us? Great question. I’ve included this silly little chart below to help us all understand the best places to hang out on this hierarchy, as well as the best places not to hang out. If humans are inherently good and inherently social creatures, let’s start engaging in some more positive social behaviors. It really will make the world a better place. 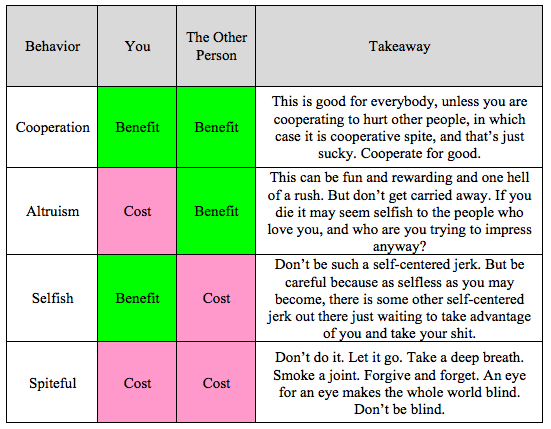 So what do you think? Are these helpful distinctions to make? Will being more thoughtful in our social interactions with others create positive change in the world? Do you even care?

“The anthropologists got it wrong when they named our species Homo sapiens (‘wise man’). In any case it’s an arrogant and bigheaded thing to say, wisdom being one of our least evident features. In reality, we are Pan narrans, the storytelling chimpanzee.”

– Terry Pratchett, The Science of Discworld II: The Globe (via thejunglenook)